Walk Off the Wait

As I stood in line at a local discount store, I glanced at the magazine covers while waiting to checkout.  One title caught my eye, “Walk Off the Weight.”  I couldn’t help but smile.  I should’ve written the article.  Over the past 5 months, by way of diet and exercise, I’ve trimmed down 25 pounds.  My exercise of choice?  Walking.

Many people enjoy gym memberships; others enjoy running multiple k’s.  Walking briskly accomplishes the same goal without all the huffing and puffing.  A vigorous walk triggers a heart rate increase, and as mentioned earlier, coupled with a sensible diet, the weight melts away.

When reading the magazine cover, I also considered changing the word “weight” to “wait.”  That statement made much sense to me as well.

Many wrongly interpret the verse, thinking “wait upon the Lord” means to put life on hold, and “wait” for God to move.  On the contrary, the word “wait” means to continue serving in the manner of a waitress or waiter in a restaurant.  A good server keeps careful watch over her tables, ready to meet the needs of the patron as they arise.  The server faithfully works in this capacity unless the manager directs otherwise.

When encouraged to “wait upon the Lord,” continue serving Him faithfully until He changes the course of your life, opening and closing doors as He sees fit.  Therefore, keep walking while your waiting.

Now get out there, and “Walk off the Wait.”

The news isn’t good in Missouri.

There are mass protests growing around the Country responding to the shooting of Michael Brown involving a Ferguson, MO police officer.  It’s a tragic situation for all involved.  Though eye witness accounts contradict, the truth remains, a young black man died in the prime of his life and a police officer will bear the life long pain of pulling the trigger, justified or not.

Of course racial tensions are high.  One protestor in NYC held a sign saying,

(Sadly, America’s racial tension has been stoked by the current Presidential Administration….but that’s another blog for another day.)  However, I do want to address,

Of course it is!!!!  There’s only one race, the human race.  Every human breathing on the planet is created in the image of God.  So my question is, where’s the outrage from the African American community over abortion?  Do they not know the history? Margaret Sanger encouraged abortion in the lower income communities to destroy

“…human weeds,’ ‘reckless breeders,’ ‘spawning… human beings who never should have been born.”

Who were these blights upon society in her view?  Blacks and poor people.  She also said,

“We do not want word to go out that we want to exterminate the Negro population, if it ever occurs to any of their more rebellious members.”

Planned Parenthood is the real racist and the black community remains strangely silent.

For the last several months, I’ve been hooked on shows like “American Pickers,” “Flea Market Flip,” “Junk Gypsies” and “Market Warriors.”  I’m especially impressed by the repurposing of items no longer deemed valuable for their original purpose.   My wife also enjoys these shows and we’ve decided that we are going to try fixing up and repurposing items we snag at garage sales.

The first was an old chair that needed a fresh coat of paint and reupholstering.

If you have interest in buying the chair, the cost is $50 plus $40 for shipping/handling.  I receive Paypal payments only through brvan71@yahoo.com.  (Yes, that’s a v and not a y)

God bless and thanks for looking! 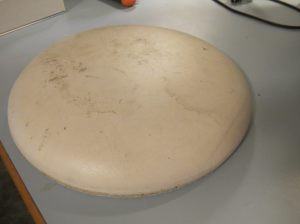 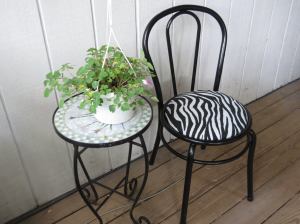 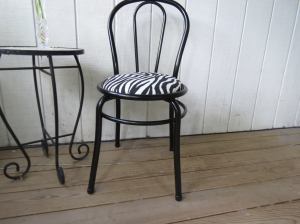