Do You Really Care About Our Kids? 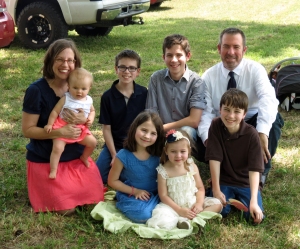 Bunch of sorts.  When our family piles out of the Suburban or walks into the grocery store, our presence raises eyebrows.  I wish I had a nickel for every time a person asks, “You know how that happens, right?” My favorite response is, “My wife knows, but she won’t tell me.”  Truth be told, we love kids.  It’s that plain and simple.

We (our family) associate or tend to support a political Party that champions children, starting at conception.  We proudly claim to be the Party of Life.  And that’s the case for the GOP unless the preferred Candidate fails to receive the Party’s nod for nominee and then some moan and groan, threatening to support a third Party candidate or refusing to vote in November.  But my third Party candidate is pro-life, you say.  That’s great, but in our overwhelmingly entrenched two-party system, a third party candidate only serves to steal votes away from either the Democrat or Republican nominee.  In this case, Donald Trump stands to lose the most from individuals dead set against the GOP nominee.

Am I one hundred percent convinced Trump’s a true Conservative?  Absolutely not!  He concerns me…a great deal.  However, am I convinced Hillary Clinton plans to perpetuate Obama’s legacy by sticking America with a third term of Obama’s ideologies?  Absolutely!  She’s promised as much.  And this is one of the only things she’s said that can be trusted.

Time and time again I converse with Conservatives who won’t vote for Trump because their conscience won’t allow it.  Well, if that’s you, I pose the following questions:

Will your conscience vote for Hillary, a woman worshiped by the nation’s largest abortion provider?

Will your conscience vote for Hillary even after she claimed Margaret Sanger as a hero?

Will your conscience vote for a woman who lied about Benghazi, blaming the attack on a YouTube video?

Will your conscience vote for a woman who compromised national security by unilaterally deciding to utilize her own private server and email?

Will your conscience vote for a woman whose husband sexually harassed and assaulted scores of women?  (Hillary called the women’s charges, “Bimbo eruptions.)

Will your conscience vote for a woman who’s been called “extremely careless” by the FBI?

And let me ask again, will your conscience permit you to allow Hillary Clinton to nominate four or more Supreme Court Justices, who enjoy lifetime appointments?

A vote for a Third Party candidate or boycotting the ballot box in November is a vote for Hillary…a violation of the conscience many claim the desire to protect.

Trump’s not perfect…not even close.  And we really don’t know how America will fare under a Trump/Pence Administration.  Clinton’s track record speaks for itself; Hillary’s term in office might be America’s death knell.

So I ask, do you really care about our kids?