As a young teenager, I remember accidentally walking into the wrong public bathroom. Once inside, I noted something strangely missing from the walls…urinals.  Immediately, I realized the error of my 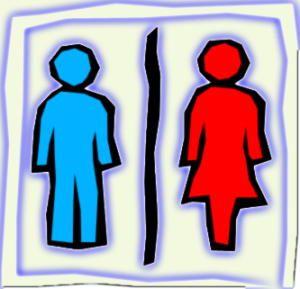 ways and rushed out, avoiding eye contact with anyone in the near vicinity.  I looked at the “male” and “female” bathroom signs. Yep, I certainly had chosen the wrong restroom.  It was a perfectly honest mistake, though.  At every other McDonald’s I’d visited, the male bathroom sat on the right. Without checking the signage, I chose the bathroom based upon its location in other franchises.  Thankfully, I wasn’t greeted by a woman inside.  I would’ve been mortified and possibly considered some type of pervert or peeping Tom.  Things have really changed since then.  Today, I could walk into any Target women’s restroom, as a male, explaining I identify as a female.

What could possibly go wrong with boys gaining access to girl’s bathrooms?  Surely pedophiles and wildly hormonal young men won’t take advantage of the ridiculous rule championed by the Obama Administration.  It’s not hard to imagine high school and fraternity boys temporarily identifying as females to ogle girls in the locker room showers.

Can you see that happening?

Liberals have evolved from “It takes a village” to “It takes a village idiot,” and idiocy is the word that best describes this ideologically driven catastrophe. Those pushing this garbage, do so from their ivory palaces, distancing themselves and their families from the detrimental outcomes.  For instance, elitists advocating for “choice” bathrooms send their children to pricey private institutions of learning, where you guessed it, bathrooms and locker rooms have designated genders…no exceptions.  Whenever suggested policies like this are passed down from D.C., only the peasants pay the price, while the political elitists toast to tolerance and inclusion.

At some point America has to say enough is enough!

II Timothy 2:22 says, “Flee the evil desires of youth and pursue righteousness, faith, love and peace, along with those who call on the Lord out of a pure heart.”

Instead of fleeing evil, our world chases after it like a moth to a flame.  Opening the door of our bathrooms and locker rooms to all genders or gender identities opens another Pandora’s Box in our already sin sick world.  Depending upon the leadership elected in 2020, it may take years to slam it shut.

A few months ago my twelve year old weighed in on this topic.  He said,

“It’s not hard to tell girls from boys.  All they have to do is look down.”

Looking down might help, but first we need to look up.