Last night as I watched television with my kids, a St. Jude commercial aired.  Snapshots of various children battling life threatening diseases scrolled, while a person urged viewers to make a financial contribution.  My eldest, a cancer survivor, asked the question,

“Dad, did you ever think we’d have such a personal connection to this commercial.”

“It seems like that was so long ago.  I don’t remember parts of it.  It’s hazy.  Almost as if it was a dream.”

You know what?  He’s right.  Even though he finished up treatment a short two years ago, it does seem like a dream…A fuzzy memory that I occasionally ask myself,

“Did we really go through that?”

Because of my son’s journey, my family participates in the local St. Jude Walk.  Each year we see kids in varying stages of treatment, some beginning the perilous trek, others near completion.  It’s also common to see youngsters sporting dew rags to cover heads stripped of hair because of chemotherapy or radiation; others wearing medical masks to ward off germs.  These kids remind me of Noah’s own difficult path.  And these kids battling cancer and other life threatening diseases prompts me to thank God each day for my son’s outcome.

I’m not a doctor or nurse, but there is something I can do to minister to the needs of kids with cancer.  First, I can pray for them.  Every family stricken with this disease knows the heartache and pain of watching a child wage the fight of their young lives.  Of course the kids with cancer need prayer, but so do his closest caregivers.  Second, I can raise funds for pediatric oncology research.  On September 26th, I’ll be walking a 5K in honor of kids fighting cancer.  Would you consider being a financial sponsor?  We readily spend money for fast food, vending machines, and large flavored coffees, thinking nothing of it.  How about foregoing caffeine or a Big Mac for a week and donating money for an incredible cause?  Let’s help St. Jude researchers discover the cure for pediatric cancer once and for all.  Let’s help more children conquer an illness so they too can say,

Here’s the link to my page.  Click on donate now.  Noah’s Hope

Today, President Obama delivered remarks at the National Prayer Breakfast.  Two of the most interesting statements include:

“Our concern should not be whether God is on our side, but whether we are on God’s side”

“Killing the innocent is never fulfilling God’s will.  In fact, it is the ultimate betrayal of God’s will.”

Based upon the President’s policies and “evolving” opinions on social issues, the remarks come across as hypocritical.

“Our concern should not be whether God is on our side, but whether we are on God’s side”

The statement rings with truth, but decisions rendered by the President seem to contradict his purported view.  For instance, during his 2004 Senate campaign, Obama said as a Christian he believed marriage should be between a man and a woman, although he supported civil unions for gay couples.  In May of 2012 he backpedaled.  He changed his mind on gay marriage, saying he was influenced in part by his daughters and wife Michelle.  Sadly, he refutes his own statement delivered in this morning’s address.  God determines right and wrong….good and bad…holy and sinful.  In every case in both the Old and New Testament when God addresses the homosexual lifestyle, the word “abomination” or “penalty” appears in the same sentence.  Obviously on this sentiment, the President failed to seek God’s heart.

“Killing the innocent is never fulfilling God’s will.  In fact, it is the ultimate betrayal of God’s will.”

This statement pertained to violent acts of terrorism, but one can’t help but relate this comment to the most innocent of our society, the unborn.

but in the same breath avidly champions the right of a woman to abort her baby.  According to Lifenews.com,

“As an Illinois state senator, Obama was so supportive of late-term abortions, he resisted efforts to protect unborn children born alive after failed abortion procedures.”

Imagine a baby surviving the probing surgical tools of an abortionist.  Once delivered, writhing in pain, clinging to life, the infant is ignored by medical personnel with a sworn duty to save life at all costs.  Sound inhumane?  Our President voted for that barbaric scenario, not once but three times.  Yes, Mr. President, I agree with your supposition,

“Killing the innocent is never fulfilling God’s will.  In fact, it is the ultimate betrayal of God’s will….”

What God labeled as sin in the Bible, remains sin today.  Sadly, our culture hurtles toward self-destruction because of an “everyone did what was right in his own eyes” ideology.  Sadly, the President mirrors this philosophy.  In a 2004 interview, a reporter asked the President about his definition of sin.  He responded,

“Being out of alignment with my values.”

Houston, we have a problem.

Oftentimes mankind’s verdict on sin fails to line up with God’s Word.  If we make the rules, we justify our behaviors by saying,

Cultural relativism might endear a world leader to an ever changing and diverse population, but does little to impress a holy God. 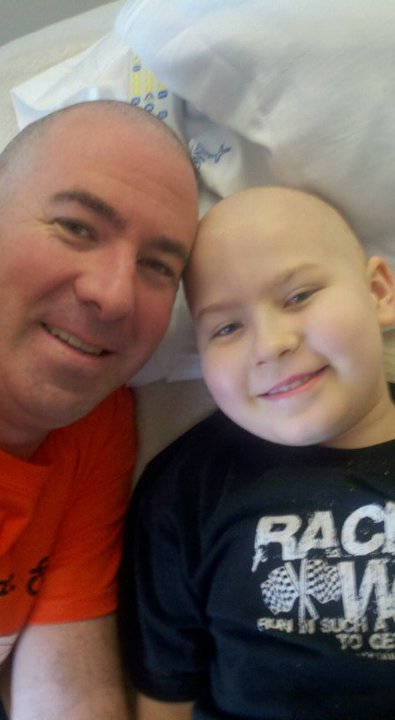 In April of 2011, my son Noah was diagnosed with Stage Three T-Cell Lymphoma.  After two years of treatment, my son’s cancer free and for the second time since his diagnosis, he’s walking with the team bearing his name.  If our team raises the most money for our region, “Noah’s Hope” leads all of the other teams from the starting line.  And this year, this means leading around Springfield Cardinal’s Hammons Field.  Yes, yes….All teams raising funds are winners, but, it’s also a ministry opportunity for our team.  This year “Noah’s Hope” t-shirts will not only say “The Cancer Wars” (in honor of Noah’s love for “Star Wars”) but it will also share a truly meaningful verse: “I Can Do All Things Through Christ Who Strengthens Me.”  And THAT is “Noah’s Hope.”  Jesus.

Today, Noah’s in remission, and has been for almost 18 months.  But many other kids are currently fighting a battle that impacts the entire family.  Alleviating financial responsibility on the household affords families the opportunity to focus on Cancer…a big enough stressor on its own.

Last year I raised a little over $900. and this year I’m setting my sights higher.  I’d love to personally raise at least $1,000.  If you’d consider a $5 donation…all of you, Noah’s Hope would easily raise the most funds and I’d break last year’s personal fundraising mark.  More importantly, kids win.

So, will you open up your wallets and pocketbooks?  Will your forego that morning coffee or a daily trip to the vending machines?  Will you give up a fast food value meal to help kids with cancer?  Here’s the link: http://fundraising.stjude.org/site/TR/Walk/Walk?px=2046385&pg=personal&fr_id=21036

My Son’s a Cancer Survivor

April of 2011 rattled the very foundation of our world.  A day that started out as a trip to the dentist, ended in a Life Flight to St. Louis Children’s Hospital.   An urgent care doctor found a mass in my 8 year old son’s chest, pressing up against an airway and pushing near his heart.

Two and a half years later he’s in remission and in 10 days we’re walking for other kids who battle varying types of cancer.  Would you be willing to donate at least $5?  Our team, “Noah’s Hope” (named after my son) currently sits in 2nd place in fundraising for the region in which we live.  If our team overtakes the team now holding first, our team starts out the race.  My son will serve as “grand marshal” of sorts.  And the great news is that our shirts this year broadcast the verse, “I can do all things through Christ who strengthens me.”

Will you spare $5 to help our team and even more importantly help kids with cancer?